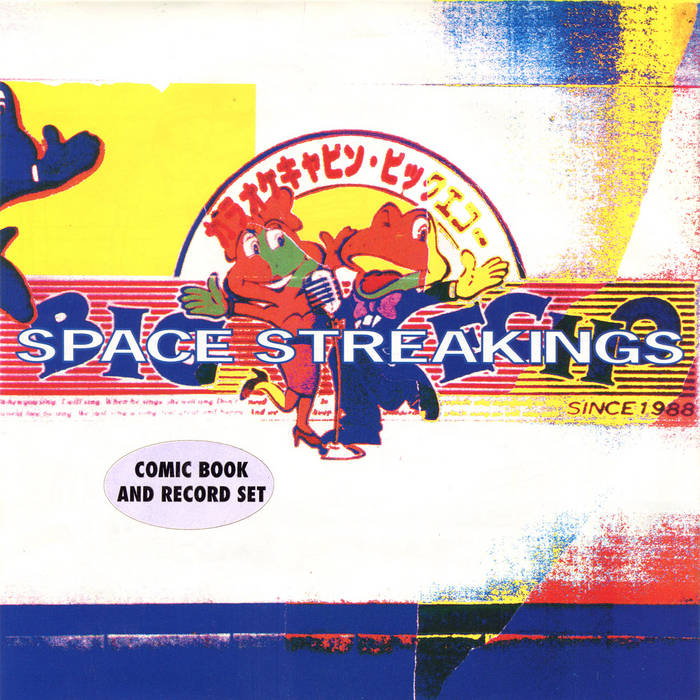 Out of print for years, SPACE STREAKINGS first two song single is now available digitally for the first time! Includes a densely illustrated 18-page PDF comic book that reproduces the original 7" and comic book set packaging. Recorded in 1993 by ZENI GEVA's K.K. Null and remastered in 2020, both tracks are exclusive to this release.

NOTE: The "Papa's Got A Brand New Karaoke" comic reads from right to left, like all traditional Japanese manga!

FUN FACT(S):
Space Streakings first came to SG's attention via the now classic Japan compilation "Dead Tech 3". After releasing their stunning debut LP on K.K. Null's Nux Organization (reissued on SKiN GRAFT with demo tracks in 2018), Null put the two parties in touch and we were off and running.

On Space Streaking first series of shows in the United States, they became fast friends with Mount Shasta, resulting in a notorious cartoon war between Kame Bazooka and John Forbes. It wasn't long 'til the two bands agreed to form a band together, which resulted in the "Space Streakings Sighted Over Mount Shasta" LP by Shackuhachi Surprise.

“The story of their formation, as well as their real names are a complete mystery (although rumors swirl that all members of the band originally worked as video game programmers), though they were probably the only band ever to utilize a gas powered guitar.” - I Heart Noise

Recorded by Kazuyuki K. Null in 1993
Remastered in 2020
Cover art by Nobta Koike

NOTE: The comic reads from right to left, like all traditional Japanese manga!