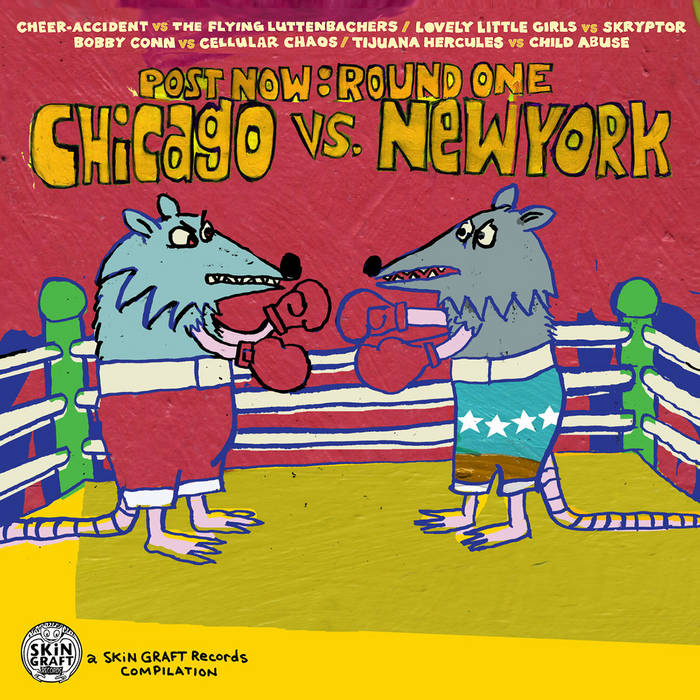 ----------------
CHICAGO vs. NEW YORK...
It’s a war that’s been waged ever since the early settlers started razing the land and long before the first high rises reached for the skies. Now SKiN GRAFT Records raises the stakes, pitting each city’s finest ‘head to head’ in a battle royale where everybody wins.

----------------
CHEER-ACCIDENT vs. The FLYING LUTTENBACHERS
In the lead off position, progressive rock’s genre-defying Cheer-Accident enlist an assist from Dead Rider-slash-U.S. Maple’s Todd Rittmann for the opening volley “War is A Warrior” - and in a dramatic about face, flesh-out and finish up a previously unrecorded composition (dating all the way back to the “Salad Days” / “Trading Balloons” era) by the band’s dearly departed Phil Bonnet.

In response, Chicago expatriates The Flying Luttenbachers switch sides and make their New York debut with their first new recordings in over a decade (both exclusive to this release). With unparalleled precision, Weasel Walter’s new line-up radically reinterpret the band’s punk-jazz standard “Demonic Velocities” and bring a brutal blast beating to all comers with the new composition “Prelude to Mutation”.

----------------
BOBBY CONN vs. CELLULAR CHAOS
A veteran of Chicago’s No Wave scene, Bobby Conn quickly developed a reputation for delivering messages of hope, politics, despair, revolution and bullshit in a quasi-falsetto, all the while decked to the nines in glitter, eyeliner and high heels. Extravagantly excessive art rock for today’s stripped-down lifestyles.

More than any other act currently at-large, Cellular Chaos mirror, reflect and escalate the spirit of NYC’s 1970’s downtown avant-garde music scene - re-upping the ante in their hi-gloss, take no prisoners blend of neo-new wave kicks, glam raunch and no wave noise-rock.

One of the most innovative, polarizing bands in New York - and coming in at a solid last place - Child Abuse go for the gut in a typically atypical way-eschewing their new-math, proto-prog precision and 12 tone composition for a five-movement-long deep dive into death metal atmospherics, scum-rock histrionics and grating noise improvisation.