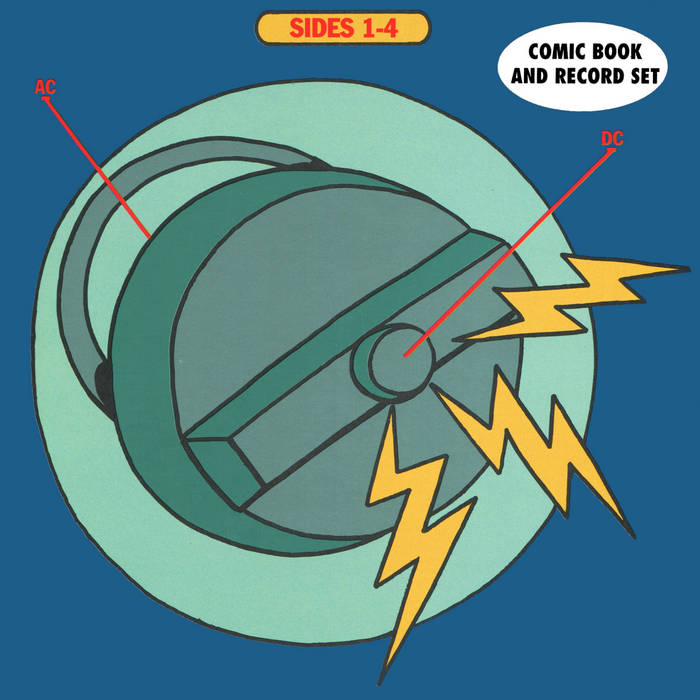 octosette Bought the original pressing when it first came out and sold it to help pay rent. Have always missed it. Shellac playing AC/DC is worth it alone. Favorite track: '95 Jailbreak (Remastered).

Co-release with Gasoline Boost. Physical Quantities are Limited. This 2020 digital edition of SIDES 1-4 has been remastered by Bob Weston and Todd Rittmann. The comic book sleeve has also been updated for this new PDF edition. It includes additional pages by original SKiN GRAFT cartoonists Mark Fischer and Rob Syers, remastered artwork and behind the scenes bonus feature pages. Please note, that you must download the files to receive the PDF comic book.

SIDES 1-4 was originally released in 1995 and was again resolicited 5 years later. Here is the resolicitation as it appeared in the year 2000…

Remember internet speculation? Punk breaking? Retro tribute records? SKiN GRAFT Records sure does and we're bringing it all back! To start, here's SIDES 1-4, a double seven inch single and comic book set featuring four great 90's bands covering the number one rock band of the 70's - AC/DC!!! Joe Carduchii wrote in his book "Rock And The Pop Narcotic" that today - "If you cut open young execs, housewives, rappers, house-mixers, salsa fans, hip-hopsters, etc, you're likely to find, 14 rings back, a layer of molten rock spewed by Australia's shaggiest eruption. " There’s no need to saw the legs off any of these Chicago bands, just put on the records!

U.S. MAPLE "Sin City"
From Thurston Moore to John Cusack, everyone is talking about U.S. Maple! If you've yet to hear them, here's a great place to start! "Sin City" is vintage stuff from U.S. Maple's first session at Easley Studios. The heaviest U.S. MAPLE song ever?

BRISE-GLACE "Angus Dei Aus Licht"
Brise-Glace was the cut up band formed back in the 90's by Jim O'Rourke. Total rock deconstruction in the vein of those other '70's rock bands- Can, This Heat and Faust. Brise-Glace's last public performance was in November of 1996. Where are they now? Darin and Thymme formed You Fantastic! Dylan joined Thymme's band Cheer Accident. Darin still plays on Jim's records (and recently played the tough guy on the Stereolab tour)!

BIG'N "T.N.T."
Kings of the pre-post rock Chicago sound (i.e. Jesus Lizard, Tar, Naked Raygun), Big'n took a proven formula, turned it on it's ear, upped the aggression and produced two of the deadliest records ever. Since recording this song, the Big'n boys casually broke up, but reunion shows have been occurring at an ever-increasing frequency. Members of BIG'N have gone on to play in Neutrino and Emperor Penguin. Big’n's latest release is a split 7" with Oxes.

SHELLAC "95 Jailbreak"
Steve Albini has a book of lurid tales chronicling the rise and demise of AC/DC's vocalist Bon Scott and Shellac's enthusiasm and authority on the subject shines through on "95 Jailbreak". An astute listener from Pittsburgh wrote in swearing that he heard pants dropping in the studio just before the second chorus.

SIDES 1-4 is the first in a series of AC/DC tribute records issued in conjunction with Gasoline Boost Records. As a bonus, SIDES 1-4 comes complete with a comic book sleeve featuring SKiN GRAFT Comix fan favorites like Serious Brown, Gumballhead The Cat and the Karate Chimp!

Recorded at One Rm. Studio

Created at the Steamroom