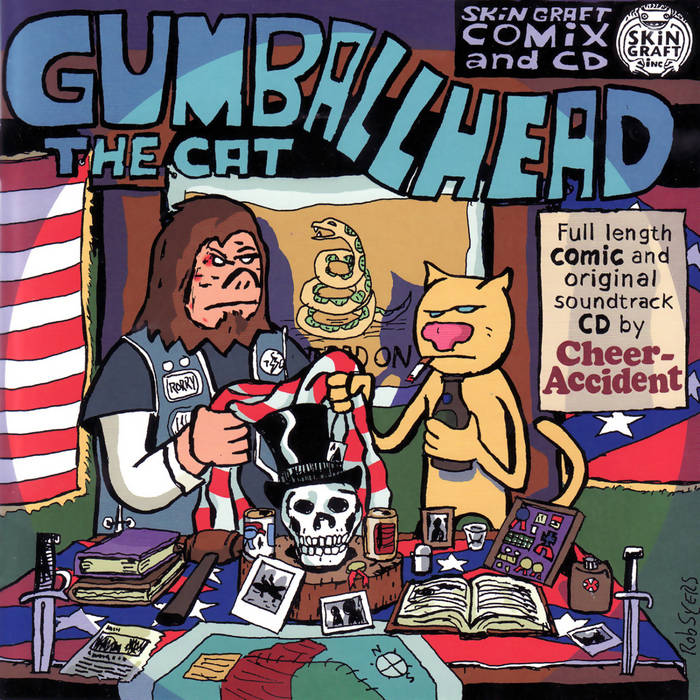 Before founding SKiN GRAFT Records In 1991, SKiN GRAFT Comix tip-toed onto the scene as a self-published comic-zine by Mark Fischer and his high school buddy Rob Syers. In the years following, both have continued to hone their cartooning skills; Mark pouring much of his efforts into the SKiN GRAFT Record Company, while Rob chronicled the adventures of his most infamous character, GUMBALLHEAD THE CAT. Gumballhead has gained renown over the years as the mascot of his own craft beer and through his appearances on Skin Graft album covers for MOUNT SHASTA and SHAKUHACHI SURPRISE.

Now, in a masterful multi-media mish-mosh of formats, Rob has drawn up a full length Gumballhead The Cat adventure "The Mystery Treasure Of The San Miguel Apartments", a mind-boggling foray into the sublimely ridiculous; filled with suspense, balls-out action, playstation addicted rave kids, hard rocking bikers and deals gone bad.

Accompanying this all new comic book is an exclusive CD soundtrack by Chicago's Prog Rock masters, CHEER-ACCIDENT, boasting a palette of rich musical textures and an engaging combination of "in-the-moment" whimsy and thoughtful, inventive composition; perfectly suited to bring the broad ink strokes of Gumballhead The Cat into the fifth dimension.

The necessity to provide the musical accompaniment for Gumballhead The Cat afforded CHEER-ACCIDENT the perfect opportunity to reveal the aesthetic leap taken by the band between October 2002 and March 2003. In other words, they've done it again: Here is a full-length's worth of audio intrigue and jaw dropping dynamic group interplay - bordering on the telepathic. Delving deeply into the realm of psychic musical intercourse and spontaneous sonic invention, CHEER-ACCIDENT has captured several unique, "lightning in a bottle" aural episodes, adroitly extrapolated into an impressively integrated composition. Joined on one track by master accordionist / synthesist / improviser (and Lozenge member) Kyle Bruckmann, CHEER-ACCIDENT unleash 13 brand new songs running the gamut from creepy to hard-rocking to melodic to downright funny.

The CHEER-ACCIDENT "Gumballhead The Cat" CD and comic set comes packaged in a format unique to this edition - the big 7" x 7" comic book is packed in a resealable plastic sleeve! In a confounding, masterful stroke of cross-marketing, Chicago's THREE FLOYDS Brewery will introduce "Gumballhead Beer" for national distribution wherever Three Floyd's beers are sold. The added exposure of Gumballhead's loveable mug on this tasty, flavorful wheat beer, in conjunction with this CD and comic set, is guaranteed to send heads spinning as Skin Graft Entertainment reaches new plateaus of absurdity.