A Walk Through Hysteria Park 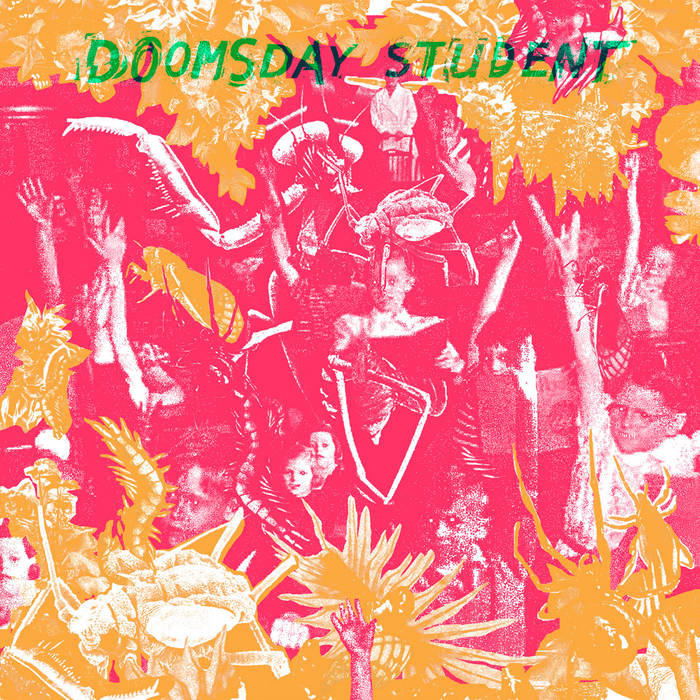 In the unhinged tradition of Arab on Radar & Chinese Stars, Doomsday Student caterwauls like four refrigerators dropped down an elevator shaft. As drums push the music forward, spiraling guitars & crazed singing use the tools of rock to dismantle rock, to make an alarm of rock, to make simultaneously songs with hooks & riffs & all that shit & also these little splitting-off universes of paranoia & hysteria & the ecstasy only exploding people truly feel.

When I listen to A Walk Through Hysteria Park on headphones in public I find myself laughing in that way that makes people cross the street away from me, that makes my spine feel made of broken bottles & soaked band aids. And I am better this way. I am more awake, more able to be in the terror & jaggedness & joy of what it is to be. Doomsday Student is a wake up call to anyone who thinks the world merely works.

o "Bat shit. Terrifying speeds, Matching outfits. 4 guys just blasting it as hard as possible, and with the chops to make the magic happen all the while. Throbbing, writhing, undulating. The band. Their audience". - Boston Hassle

o "Doomsday Student is some of the loudest shit ever and an amazing take on post-hardcore. They wear all black, except for their orange shoes. Eric Paul is one of the most incredible frontman of any band ever, self-flagellating all over the stage, eyes bulging out of his shaven skull and screaming. They have really nice equipment, and they aren't just playing: every screaming guitar note and drum beat is not only turned up to 11, but maxed out on every channel". - Impose Magazine

o "Doomsday Student is most of Arab on Radar and a member of the post-Arab on Radar band Chinese Stars. Now, I don’t know the whole back story, nor is it fair to dwell on it, but Arab on Radar reunited, broke up again, and then this band was formed minus one original member. There’s a new name and all-new material, but it’s impossible to ignore that this is essentially the new Arab on Radar. So for those of us who fondly remember that band and their cathartic live performances, the main question is how does Doomsday Student measure up? I am happy to report that they are every bit as great. None of the energy is missing". - No-Core

o "Eric’s voice. It’s what makes the music more creepy than just aggressive. The creepiness is important. It’s hard to be tough and creepy at the same time. I'm not a tough guy and I don’t really like tough things. And these guys are making heavy, intense music that isn't masculine in the conventional sense. And it’s music that’s really sexual without being “sexy.” And it’s the kind of thing I love hearing at a party, but there’s no way you’d call it party music". - Dan Deacon - guest editor of Magnet Magazine

o "Like singer Eric Paul's other band, The Chinese Stars, Arab On Radar are just one of those bands that are purely addictive. When you first listen to either band you think that they must be absolutely bonkers and you are not sure what to make of it. It's not really experimental, nor straight forward and there is this weirdo element you just cannot shake. But once you have indulged in these Skin Graft acts more than once you cannot stop". - Berlin Craze